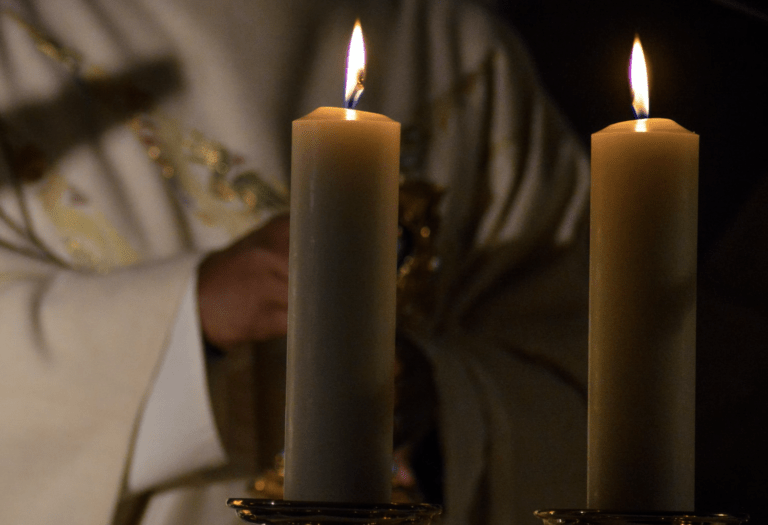 Very little is known about Saint Blaise, who lived in Armenia in the early 300s.

Tradition tells us that the beloved saint was a devoted physician to whom many miraculous healings were attributed. Having been of noble birth and educated in the Christian faith, he later became a bishop. Christian persecution instituted by Emperor Licinius of Rome forced Saint Blaise to flee to a life of solitude and prayer.

While hiding in the wilderness, Saint Blaise grew in his affection for the wild beasts in his midst and was said to have a special relationship with them. Eventually, hunters came upon the cave of the hermit who surrounded by wild animals who miraculously did him no harm. The frightened and astonished hunters hauled Saint Blaise off to prison. Along the way, they met a frantic mother and son. The boy had a fish bone lodged in his throat.

Saint Blaise healed the boy and thus became the patron of those suffering from ailments of the throat.

While in prison, Saint Blaise continued his miraculous healings and was gifted with candles to light his cell as a gesture of gratitude from a recipient of his healing touch. The candles became a symbol of his ministry and are often portrayed in images of the saint. Saint Blaise was later martyred having been tortured with iron combs used for processing wool and eventually beheaded.

Because of his special patronage, the Church celebrates the Feast of Saint Blaise on February 3 with the traditional blessing of throats.

Often two blessed candles are crossed or twisted and tied with a red ribbon, the symbol of martyrdom. A priest or deacon places the candles next to the throat of the recipient and prays, “Through the intercession of Saint Blaise, bishop and martyr, may God deliver you from every disease of the throat and from every other illness. In the name of the Father, and of the Son, and of the Holy Spirit.”

Our family has a special devotion to Saint Blaise, one of the patron saints of our son who passed away in 2008.

We receive the Blessing of Throats annually, and attribute this blessing to an unexpected healing. In 2017, our family and friends prayed the novena to Saint Blaise leading up to his feast day. Our intention was for the healing of my carotid artery which had been seriously injured during childbirth. I received the Blessing of Throats and days later was blessed with news that my artery, which only months prior was almost entirely occluded, had been completely restored.

On his feast day, may Saint Blaise, patron of throat illnesses, animals, wool combers, and wool trading be remembered in our homes. May his intercession draw us closer to Jesus and bring healing as willed by our Heavenly Father.