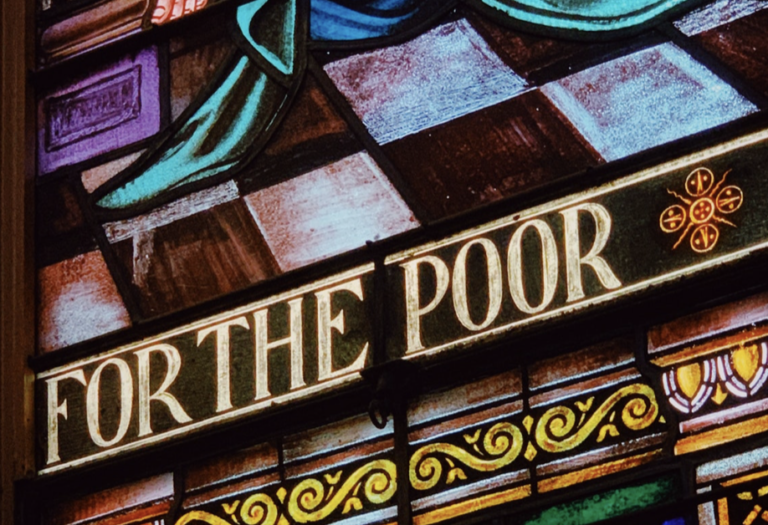 During the Lenten season we are encouraged to contemplate sacrifice, prayer life, and almsgiving,

I’m reminded of this story our parish priest shared with us about a trip he took to the mountains. He’d been traveling by car for quite some time when he came across a man on the side of the road, begging for money. As he was traveling with another priest, they remarked about this, wondering aloud what they were called to do in this situation.

What if the man was asking for money to buy drugs?

And then these words struck our good pastor: the priest he was traveling with asked, “What if it’s not up to us what his intentions are? What if it’s only our responsibility to do what Jesus expects of us, and what the receiver of the charity does with it is not part of the equation?”

Fast forward to a random day at a gas station near my home, months later. I was filling up my vehicle when a man in a car at the pump next to mine exited his vehicle and approached me. He seemed embarrassed as he asked for some money to get some gas. He said he didn’t have enough to fill his car, had traveled from a couple hours away and didn’t have enough fuel or money to get a few more hours west. I knew all I had was a $20 bill.

My heart told me that to give it away would mean a fair sacrifice for me.

I thought about Father’s words and reached in my purse. The man thanked me, got in his car, and quickly drove away, not having purchased gas. I stood, mouth open, sad, punched in the soul. Someone who’d witnessed this exchange between us approached me, asking if I’d really given that man my money. I nodded, still a bit incredulous at the whole thing.

My trust scathed, his audacity abundant. The witness started telling me that he’d also given the man money, and he would never fall for giving anyone money again. I took a deep breath, still thinking of Father’s words.

“Please think about that. Our responsibility is to be charitable. What the recipient does with that charity is his responsibility.”

Struck by these words, I’ve considered and reconsidered it. I’ve certainly not perfected it, but my perspective on what charity is changed with that homily. Yes, we are called to feed the hungry, clothe the naked, love the unloved. Am I too concerned in the minutia, especially that which I have no expectation to control, the “what ifs” of it all? How can I continue to reflect and adapt my reaction to the charity that others need?