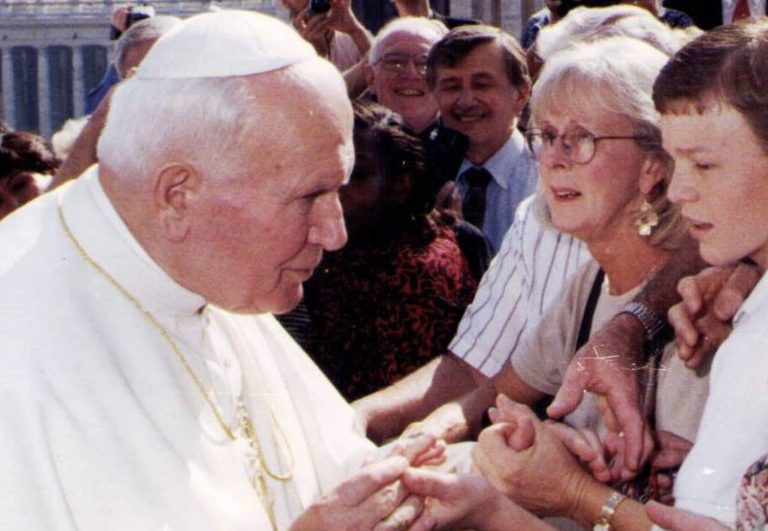 Let me tell you a story of one of the most exciting days of my life.

My oldest brother is a priest, and when I was fourteen years old, he was ordained a deacon in St. Peter’s Basilica in Vatican City. My entire family, a large group of friends, and representatives from our diocese, including Bishop Andrew McDonald made the journey to Rome. The ordination was on a Thursday, and every Wednesday the pope has a public audience in St. Peter’s Square. This is a must-do while in Rome because everyone wants to get a glimpse of the pope. If you can get a crooked out-of-focus snapshot of him as he drives by to prove you saw him, that is icing on the cake. We got to our seats and waited.

Pope John Paul II was pope at the time.

His Parkinson’s was present, but he was still able to walk on his own with a cane. He rode in on the popemobile and walked to his chair, and our goal of seeing the pope was complete. What hadn’t dawned on the fourteen-year-old me is that now we had to sit in the sun for two hours while the pope repeated his address in what seemed like eighty-seven different languages. The excitement of seeing the pope wore off quickly.

Little did we know, the real excitement was yet to come.

At the end of the audience, we stood up to applaud, and to our great surprise, Pope John Paul began to walk right towards us. Chaos ensued for the next thirty seconds. In a mad scramble, people started moving to get in position as close to him as they possibly could. My older brother grabbed me and my younger brother and pushed us through the crowd to the front of our section. The pope walked directly to my younger brother and shook his hand, and then slowly moved along the barricade and eventually shook hands with my sister, my mom, and me.

As I sit here today, I still struggle to explain the feeling of this moment. It was something much more than simply meeting a famous person. It wasn’t about getting a photo (though we did get it a photo). In his touch and his gaze and his presence, we all felt power and authority and humility and love.

We felt holiness. We felt Christ.

Now as I reflect on it, I think of the words of the Gospel of John:

After the audience, my mom, my brother, and I were standing on the steps in front of St. Peter’s awestruck. Bishop McDonald came up behind us and put his arms around all three of us and we cried together as the emotion of the moment poured out.

Our entire group went to lunch nearby to celebrate, and my little brother ate lunch left-handed, vowing never to use or wash his right hand again.

Every encounter with a saint, whether in-person or through prayer, should make us ask the same question: how can I channel God’s love to the world as this person did? How can I form my life so that when I speak, others hear the voice of the shepherd and not my own? The canonized John Paul II did this. I believe the not-canonized Bishop McDonald did this too. My prayer now is that I may do the same.

2 thoughts on “The Shepherd’s Voice”