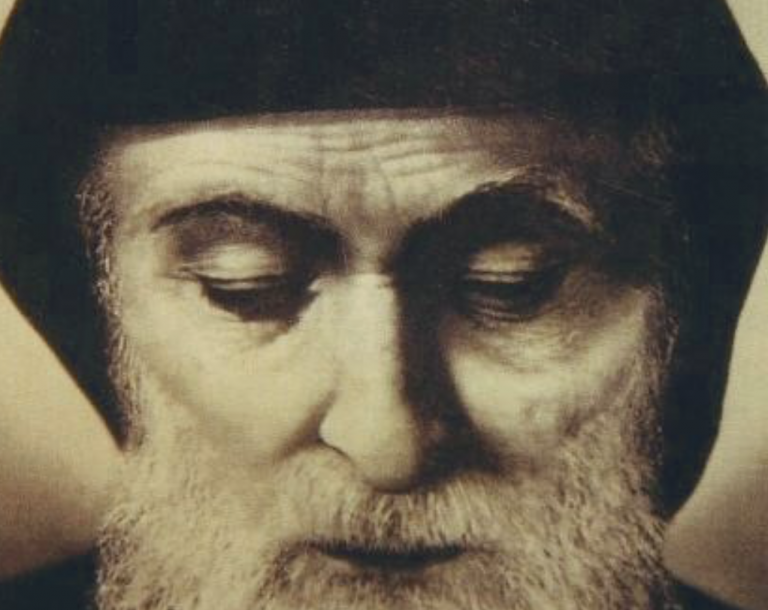 One of my most favorite things about being Catholic is the truth and reality of my experience of the saints. The veil between Heaven and earth is so incredibly thin!

They find me, I find them, we become friends, they intercede for me, they provide miracles through their intercession. Sometimes our relationship is simple, other times it’s very profound.

I’d like to invite you to do some research on St. Charbel (also spelled Sharbel).

This guy FOUND me.

I have been on a very long journey of healing, from so many things, but mostly many physical ailments. He intercedes for those in need of healing.

About a year ago I had a friend who has some real deal spiritual gifts tell me that she saw this saint, St. Charbel, standing next to me. She said this to me as I lamented over my stomach problems for the umpteenth time. I shook it off and actually didn’t believe her. She told me to go home and look him up. She told me that he wanted to heal me.

I never looked him up. That’s crazy. I tend to run in circles with people who have some pretty outrageous mystical gifts, but it’s hard to believe he was standing next to me, right?

A few months passed and my mother-in-law called me to tell me that the priest at her parish had just hung a beautiful new picture of a saint up behind the altar in their sanctuary. He was interceding for the people who needed healing at the parish. She said he was Lebonese.

She told me his name was St. Charbel… I then remembered that I had been told to pray to him for healing.

Maybe my friend wasn’t crazy?! So I began to do my research on him.

A few weeks after that, I had a good friend visiting me. She was asking me all about my stomach problems and how I was doing… I lamented yet again that I was still struggling through, trying to eat special diets, trying to do all the things and how I had a new friend, St. Charbel, who I was asking to pray for me. She returned home and three days later left me the craziest message ever!

While she was here, she told me she had a new friend who was very spiritually in tune, who she loved to hang out with. Immediately after she left my house, she hung out with this friend. She told her all about the visit she had with me… she asked her friend to pray for the healing of my stomach… instantly, the friend looked at her and said,

They both started screaming because I had JUST told her that I felt as if I was being asked to ask his intercession… they left me a message screaming from excitement because of what the Holy Spirit had done. He was clearly sending me messages.

The next month I attended Mass at the parish where my inlaws attend. I got to be at Mass while looking at the Lebonese saint who wanted to heal me. It was beautiful.

As I began to study him I found out that when the Lebonese celebrate Mass on the 22nd of every month, they beg his intercession for healing. It is St. Charbel’s day for them.  As I called my mother-in-law to tell her about my discovery of the Masses on the 22nd, we realized that she and my father-in-law both have birthdays on the 22nd, May & October. As she said this a huge van passed me with the LARGEST STICKER ON THE BACK WITH THE NUMBER 22 ON IT. I screamed pretty loud! Our Lord is so funny to me.

St. Charbel lived in Lebanon and become a Maronite monk.

For his first 16 years as a monk, he prayed and worked in the fields. Afterwards he left for the mountains and spent the next 23 years in a hermitage, praying and fasting and adoring Our Lord. In 1898 he suffered a stroke and died 8 days later on Christmas Eve. It wasn’t long after he was buried that people began to see his gravesite glowing. Within a very short time, he was canonized because people were coming to visit his burial place by the thousands and were being healed of every ailment, including blindness, deafness and all kinds of rare illnesses with no medical explanation. He was incorrupt when they dug him up and canonized him on Oct. 9, 1977 in St. Peter’s Basilica.

There is so much more to this story, so google away.

I continued to pray to St. Charbel for healing. I also realized in many ways he was calling me to pray for any healing our families needed and the people of our parishes. I also realized the big main entrance to my parish was just numbered with #22!

So much healing has taken place. The healing is another story for another time, but it’s quite beautiful. He has been such a friend to me. I encourage you to meet him, read about it, tell him what you need and share him with others. He is an intercessor for healing. And it is no surprise to any of us that our world is in great need of extensive healing right now.

St. Charbel, pray for us.