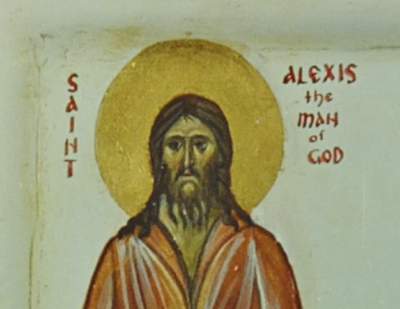 I received my Sacrament of Confirmation my sophomore year in High School. I was 16. The way in which I chose my confirmation saint was reflective of the depth of my spirituality at the time.

To get to the point quickly, I chose my saint based on the fact that I liked the name.

Shallow, I know. I knew nothing about Saint Alexis other than I might have read something about him being the patron saint of hospitality.

It wasn’t until many years later that something sparked my curiosity and I looked into this St. Alexis. I read about how he was the only son of a rich Roman senator and how his parents were good to the poor. About how he went to Syria to live in poverty and how a portrait of our Blessed Mother spoke to a crowd to tell them Alexis was “The man of God.”

He became famous and fled back to Rome where his parents, not knowing who he was, but being so kind to the poor, allowed him to live under their stairs. He only went out to go to church and to teach little children about God. When he died, they found a note on his body telling who he was. Nowhere could I find anything about him being the patron saint of hospitality. No, that is Saint Julian.

If I were to choose today, my choice would be much different.

Without a doubt, I would choose St. Joan of Arc. There is so much about St. Joan that resonates with me. She is an example I strive to follow. Her willingness to trust God, to faithfully obey, and to know so concretely that her Creator made her for a purpose and therefore she should not be afraid to follow where He leads.

Canonized in 1920 by Pope Benedict XV, she is one of the most well-known saints in the Catholic church. She is known for her strength and courage. She has a special place in my family’s nightly prayers, and when I’m facing a situation where I need strength and courage I pray for her intercession through a novena. Part of that novena includes:

“Saint Joan of Arc, patron of France, my patron saint, I ask you now to fight this battle

with me by prayer, just as you led your troops to victory in battle. You, who were filled

with the Holy Spirit and chosen by God, help me this day with the favor I ask”

My husband and I have made it a practice to teach our children about the saints. We have our go to saints, the patron saints of our family, but we also try to introduce new saints through books, audio stories (our kids favorite), and movies. Glory Stories is a fantastic resource. My children listen to these stories about the lives of the saints over and over again.