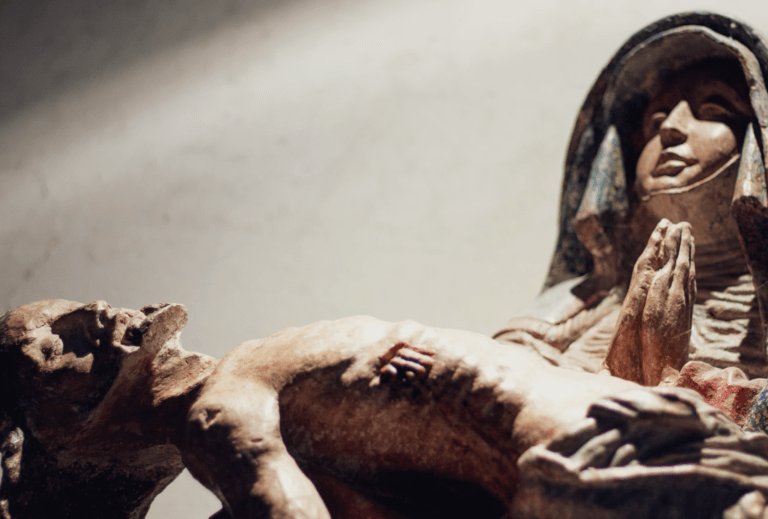 Several years ago during Holy Week, my then-neighbor schemed with my husband to have me walk over to her house in the evening.

It had to be planned this way, as evenings in a house of 4 little people are what they are, and she knew I wouldn’t just go without proper motivation. He gently took over my duties and instructed me to go, compelling me with the idea of a surprise that awaited me.

I walked into Ms Pat’s home, then, still sweaty from cleaning house and children, to find a large area of her living room dedicated now to a beautiful statue of Our Lady, though not one I was especially familiar with. Our Lady, Rosa Mystica, was standing several feet tall, surrounded by roses and other flowers and greenery, elevated on a stand I couldn’t see.

The house, like the night I’d just walked through outside, was dimly lit and oddly quiet. She was crying. The statue.

She was crying actual tears, each drop moving nearly imperceptibly, rolling down her cheek, the consistency of holy oil rather than water.

The heaviness of each tear was halting. I stood there, dumbstruck, unable to do anything but stare blankly. Ms Pat gently coaxed me to move toward Her and pray or kneel or venerate, perhaps more respectfully than I was currently with my mouth agape and my eyes fixed steadily and fearfully on Her.

She was too beautiful and I too rapt to move or speak. Only pray, “I’m sorry I disappoint.” And I could feel her sorrow in my depth, and in my throat. I don’t remember returning home to my children and husband.

Several days later, I returned home from …something… to find that they’d conspired again and placed Rosa Mystica in my piano room.

Special permission had been obtained, as it had been for my neighbor originally, and She would spend a short bit of time in our house. I was still in awe, but we prayed kneeling before her, or just sat with Her knowing that we were in Her presence. I’ll be forever grateful to Ms Pat, and to my conspiring spouse, for this special gift.

Rosa Mystica is a beautiful example of God’s inexplicable and lavish generosity in using others and objects to draw us to into closer communion with each other for His glory.

The Catechism of the Catholic Church teaches in paragraph 2132:  “The Christian veneration of images is not contrary to the first commandment which proscribes idols. Indeed, ‘the honor rendered to an image passes to its prototype,’ and ‘whoever venerates an image venerates the person portrayed in it.’ The honor paid to sacred images is a'”respectful veneration,’ not the adoration due to God alone:

Religious worship is not directed to images in themselves, considered as mere things, but under their distinctive aspect as images leading us on to God incarnate. the movement toward the image does not terminate in it as image, but tends toward that whose image it is.

During Holy Week, Catholics traditionally venerate the Cross.  The Cross itself is an object of punishment, state mandated torture, and death.  There is nothing inherently venerable in it–in its shape, in the wood from which it is made, nor in its intended purpose.  Yet, we look upon it with love–not love for the material object, mind you.  But, we look at the Cross with love because it serves as an icon that immediately diverts our gaze from the material to the eternal.  From the created to the Creator.

The Cross, sacred images, statues of the saints. . .all things in our created world can be redeemed and miraculously affected by God to bring us closer to Himself.  As Pope Benedict explained, “God has made himself material for me; I venerate the material through which His salvation came to me.”