Holy Thursday: The Eucharist, The Priesthood, and Love 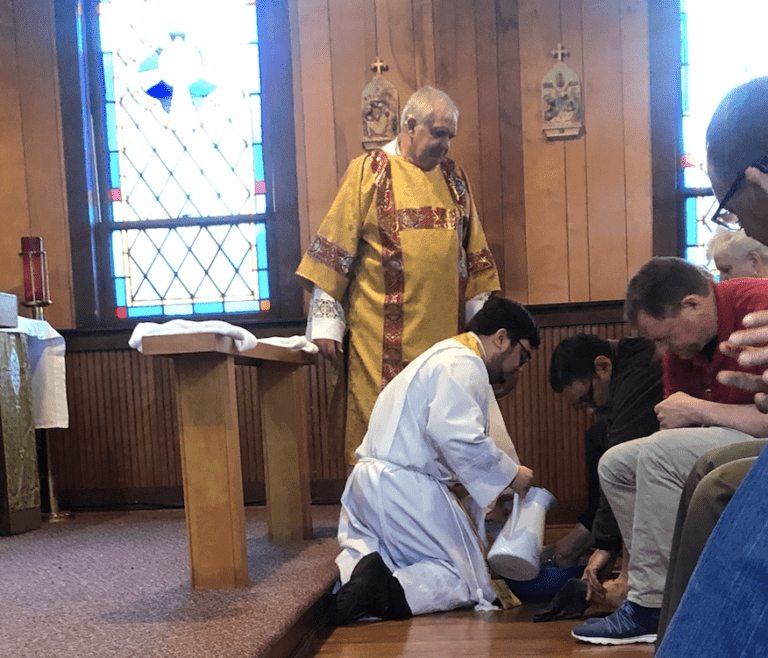 It was a difficult time filled with pain and heartache. She had suffered physically and mentally due to her debilitating diagnosis of Alzheimer’s disease. My father was also diagnosed with Alzheimer’s and passed away 9 months before her. Caring for her and my father throughout the natural progression of their disease process was humbling, joyful, exhausting, and extremely painful.

I watched both of them digress from practicing as brilliant physicians to watching them behave as toddlers playing with their food and silverware at mealtimes. Although both of their death experiences were different in nature, both were grace filled and spiritually beautiful.

As said above, Holy Week last year was filled with deep sadness for me and my family.

Death was so real and so present as I mourned the death of my mom while mourning the death of my Savior. My mother’s funeral had to be postponed until after Easter. The wait time and preparations for her funeral seemed to go in slow motion. I tried to comfort myself knowing that she and my dad would not only be reunited in heaven that Easter but that they would also be in the presence and glory of the resurrected Christ.

The promise of newness and rebirth in Christ was theirs….and the sadness and heartache of now losing both parents was mine.

My grief consumed me even though I knew in Christ there was soon to come rebirth in His Resurrection.

Also during that Holy Week, my thoughts were focused on my son who was to celebrate his first Easter Triduum as a priest.

Fr. Stephen was ordained to the priesthood 10 months prior to my mother’s death. He was present when she died, blessing her right before she took her final breath and concelebrated at both her and my dad’s funerals. Because of the distance and time constraint, I realized I would not be able to attend his first Holy Thursday Mass as a priest.

As a family, we have always looked forward to this Mass as it begins the Easter Triduum. In the Catholic Church, Holy Thursday observes the commemoration of the institution of the Eucharist and the institution of the Holy Priesthood by Jesus at the Last Supper. In addition, the traditional washing of feet by the priest imitates Jesus washing the feet of his twelve disciplines prior to the Last Supper. It is a display of humility, compassion, and extreme brotherly love. It is this love that Jesus calls us to have for one another, and it was this love that my parents always saw in their grandson, Fr. Stephen.

Needless to say, while attending Holy Thursday Mass last year at my own parish church, my mind was constantly thinking about my son and the tremendous humility and love he was experiencing for the first time while celebrating this beautiful Mass.

Instead of being at his current parish to begin the Easter Triduum, he was sent to a small parish nestled atop the Boston Mountains in Winslow, Arkansas. The town happens to be close in distance to where another son of mine, Jonathan, currently attends college. Little did I know that Jonathan drove to the small parish that evening to be present for his brother’s first Holy Thursday Mass.

While Fr. Stephen was performing the washing of the feet, Jonathan discreetly took a photograph and sent it to me.

Although not the best quality, the photograph brought tears to my eyes as I could see my priest son kneeling and washing the feet of twelve parishioners. It was at this moment that the humility and love coupled with the commemoration of both the Eucharist and Priesthood brought peace and comfort for the grief that overwhelmed me from my mother’s death. I wept in thanksgiving for God’s enormous love for me, my parents, my priest son, and every human being.

I was drained that evening but stayed awake to go through pictures and albums to be displayed at my mother’s funeral.

It was cathartic as I laughed and cried recalling sweet memories. While I was tiring from the task at hand, I came across one picture that profoundly impacted not only that evening, but also my entire life.

It was a picture of Fr. Stephen’s first Holy Communion dated April 18, 1999… exactly 20 years ago from the day he celebrated his first Holy Thursday Mass, April 18, 2019.

It not only confirmed for me the beauty and newness of God’s prophetic hand in every person’s life but also confirmed God’s enormous love for each person He died for. With His death, there is new life. As I held tightly to the photograph, I felt my mother smiling and reassuring me that nothing is more beautiful than Christ’s love for us. 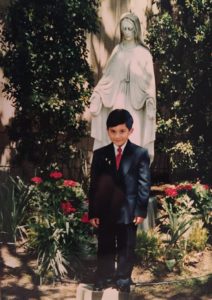 3 thoughts on “Holy Thursday: The Eucharist, The Priesthood, and Love”