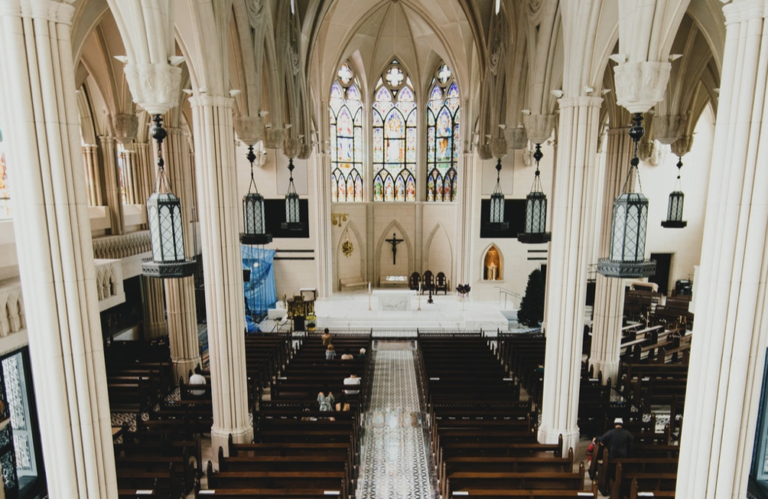 My very first sense of a divide among Christians came as a very young child.

On one occasion, I recall overhearing adult family members talking in hushed voices about someone marrying a non-Catholic “outside of the church.”  Now, I went to the wedding.  I was pretty sure it was in a church.  It looked like a church.  There was praying.  I had to wear a nice dress.  But, the conversation was laced with scandal.  Needless to say, I had some pretty pressing questions on the matter.

Another time—in early elementary school—I remember riding home from school in the humid heat of New Orleans and being stopped at a stop light next to a big yellow bus filled with kids.  My backseat window of our car was down and the windows of the bus were also open such that the kids just outside my window could peer down at me in my uniform jumper.  One of the kids yelled out, “Cat-licker!”  All the kids laughed at me in a mocking way. More cackles and more “Cat-licker.”  My mom quickly rolled up the window.  Y’all, I had never licked a cat in my entire life.  What could this even mean?  My mom simply explained that they were making fun of Catholics.

None of it really made much sense to me, but I learned early that there was a difference between being a Catholic and a “not a Catholic.”

I perceived the tension even when I didn’t really understand the cause.  It was something that always made me uncomfortable.

What I didn’t know so early, however, was how close to home true Ecumenism hit for my family.  You see, my two grandfathers, maternal and paternal, were not Catholics. My grandmothers, both of them, were faithful Catholic women.  I have vivid memories of listening to one grandmother pray her rosary in French and sitting beside my other grandmother at Mass snuggled in close to her, so intoxicated by the smell of her Oil of Olay and the kaleidoscope of colors from the stained glass windows above the altar.  Both are such happy memories for me and I can honestly say that I had zero idea that neither of my grandfathers were Catholic until much later in life.

I attribute my blissful ignorance, in part, to a childlike lack of observation.

I mostly attribute it to the grace and charity of my grandparents—all of them.

Never, to my ears, did my grandmothers ever make any derogatory statements about the faith of their husbands (United Methodist and a reformed sect of the Latter Day Saints, to be specific).  They never, to my eyes, shot judgmental glances across dinner tables when the sign of the cross was not made.  To my knowledge, my grandfathers never did anything that would have impressed me about the religious differences that marked their marriages and families.

There is a time and a place for real and serious discussions about faith and all the things that divide us.  I believe that.

But, I have come to also believe that Ecumenism, sincere cooperation and gracious unity among Christians, is an essential step for us in honoring the Savior who prayed that “they may all be one.”

In his reflection on the modern origins of Ecumenism among Catholics and Protestants, Timothy George, dean of Divinty at Samford University, observed the initiative of Pope. St. John XXIII:

“What the Holy Father was hoping to stir up—or rather to pray down—was a new Pentecost.”

Yes.  This is what we want to do, too, this week with our series on Christian Ecumenism.  We want to introduce to you some voices of non-Catholics who model for us a spirit of Ecumenism in our lives and communities.  We want to pray down upon us all a spirit of understanding and hope that one day, by God’s grace, we may all be one.