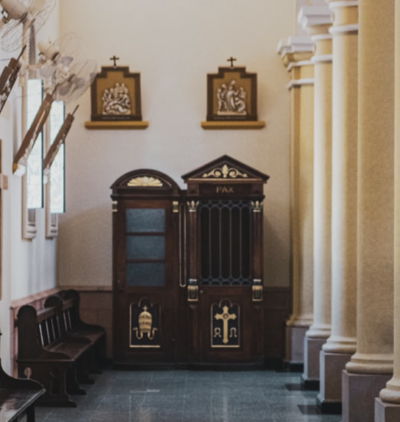 As I sit here reading Saint Augustine’s Confessions (on repeat, as it is food for my soul) a particular phrase jumps out at me. “…the thrill of having partners in sin.”

The thought both resonated with and terrified me simultaneously.

I was appalled at the thought that I would ever rejoice in another’s sin.

How could I if I really loved that person? As I reflected, I realized the thrill just might be closer to home than I’d originally thought.

Similar to when I start an examination of conscience, my mind first went to the most egregious of sins. Have I ever been an accomplice to murder? No. Do I engage in social situations where the Lord’s name is being taken in vain? All good there.

But as I take a more realistic approach to considering this point I begin to become more cognizant of how I am guilty of this.

As I reflected I began to notice how when I fail to do something I know I should, or I do that thing very poorly I look to justify myself by finding others, specifically those I respect or hold in high esteem, who also neglect to do that same thing.

I’ll use a (not actual sin) non-real, simplistic example to help explain what I mean.

Let’s say that I don’t make my kids brush their teeth every night. I would seek, maybe even unconsciously, to casually bring teeth brushing up in conversation, of course without admitting guilt.

If someone in the conversation happens to admit to not making their kids brush their teeth every night, especially if I look to that person as a role model for motherhood, there is a moment of joy, relief, and vindication.

This is what I think St. Augustine was talking about.

Why does this failure of another make me feel better? Should not my first thought be to pray for them as well as atone for my own sin?

While St. Augustine was talking about committing the sin with someone I think this falls under the same concept. I don’t have answers to why I have these feelings, but I do know they are feelings I must be aware of. I must deliberately make an effort to not participate as a companion in sin, in neither seeking nor providing the validation.

One thing I have learned in my many years on this planet is that you never know who might be looking to you as a role model. Whose life you might have a major impact on without ever realizing it. Therefore always “Show yourself in all respects a model of good deeds, and in your teaching show integrity” – Titus 2:7

It is customarily encouraged that Catholics avail themselves of the Sacrament of Reconciliation during the Lenten season, in anticipation of Easter.  Often, Confession hours are extended during Lent to accommodate the faithful seeking the Sacrament.  Saturdays are a GREAT opportunity to go to Confession throughout the year as many Churches have regularly posted hours for Confession on those days.

Can. 987 To receive the salvific remedy of the sacrament of penance, a member of the Christian faithful must be disposed in such a way that, rejecting sins committed and having a purpose of amendment, the person is turned back to God.

Can. 988 §1. A member of the Christian faithful is obliged to confess in kind and number all grave sins committed after baptism and not yet remitted directly through the keys of the Church nor acknowledged in individual confession, of which the person has knowledge after diligent examination of conscience.

§2. It is recommended to the Christian faithful that they also confess venial sins.

Can. 989 After having reached the age of discretion, each member of the faithful is ob-liged to confess faithfully his or her grave sins at least once a year.

Have you been to Confession?