This Little Light of Mine 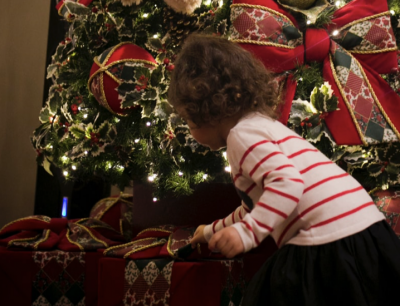 Lord, by your guidance may my children always walk in Your light. Protect them and keep them far from the darkness by Your loving hand.

This prayer I have prayed more times than I can count.

Light has long been a theme in my life. The prayer that I may be a light to others, that my children and Godchildren walk always in the light, and the warmth I feel when I see that light in the eyes of another.

Perhaps this is why we decided to name our daughter after Saint Lucia (Lucy).

Lucy’s Latin name Lucia shares a root (luc-) with the Latin word for light, lux. Many traditions tell of Saint Lucy as the bearer of light in the darkness.

Born in 283, she was a Christian martyr. Tradition holds that she pledged her virginity to God, but was betrothed to be married to a rich pagan by her mother. When she refused and distributed her dowry to the poor, her betrothed denounced her and after refusing to burn a sacrifice to the emperor was sentenced to a brothel.

When the guards came to take her, they were unable to move her, even after hitching her to a team of oxen. Frustrated, the guards piled bundles of wood around her and set them on fire, but they would not burn. She eventually met her death by a sword being thrust into her throat. She was 21.

Saint Lucy is the patron saint of the blind and of eye disorders. She is often depicted holding eyes on a gold platter. Legends tell of Saint Lucy either having her eyes gouged out as part of her torture prior to being killed or that she gouged them out herself to discourage a suitor that was attracted to them. When her body was prepared for burial it was discovered that they were miraculously restored.

Saint Lucy is one of eight women along with the Blessed Virgin Mary who are commemorated by name in the Canon of the Mass.

Her feast day is celebrated on December 13th which is often referred to as a festival of light. Our family takes part in this celebration by dressing our Lucy in the traditional white dress and a red sash (as the symbol of martyrdom) wearing a wreath of candles (like this one) on her head and delivering treats to her brothers early in the morning.

May we all bring a little light to the world this Advent season.

Saint Lucy, Pray for us!

Saint Lucy, you did not hide your light under a basket, but let it shine for the whole world, for all the centuries to see. We may not suffer torture in our lives the way you did, but we are still called to let the light of our Christianity illumine our daily lives. Please help us to have the courage to bring our Christianity into our work, our recreation, our relationships, our conversation — every corner of our day. Amen