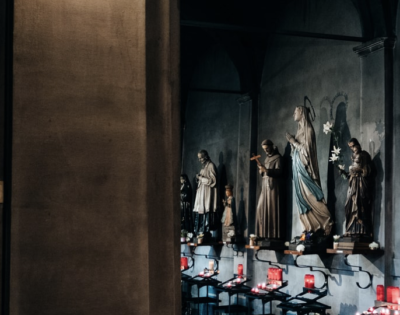 It was part of our school morning routine, one short prayer said together followed by a quick story about the saint of the day, just before I ran off to the bus stop.

It was a small thing really, this daily invocation led by my mother.

Often it was interrupted, fragmented, or disorganized, and we were usually disheveled. Somehow though, amidst chaos, chatter, and making sure we finished our Cheerios, she read to us the lives of the saints on the daily.

It was in those brief morning moments though that I encountered stories of adventure, romance, and sacrifice. I learned about heroes, rule breakers, patrons, and legends. Their stories contained the beauty, triumph, human virtue, and God’s grace towards which I aspire. They were filled with ecstasy, eternity, and encounters with heaven, too.

There are lives brimming with sadness, and all sorts of terrible things of which I want no part, yet their bravery, courage, and resilience beyond the power of human strength made all the suffering seem so powerful. Other stories share simplicity, of ordinary people able to find meaning in the most tedious of tasks and in the most mundane of moments.

They exist through centuries and across cultures, in times of war and distress and corruption, within broken families, amidst sin and addictions, and mental illness, too. They are among the poor and the wealthy, royals and peasants, within every race and nation.

Among their unique differences, though, is a shared reliance upon Jesus that inspires greatness, and sets their human experience apart.

These women and men are the remarkable people with whom I credit filling up my childhood with faith rather than fairies. They were audacious, hopeful, and they believed in the type of love that surpasses the limits of human ability. How thrilling for me to learn that I could call upon them for help, talk with them in prayer, be inspired by the ways they loved.

How awesome it is to rely on their humanity so as to better understand my own.

What a reminder is their intercession in our lives that death is not the end of a life well lived, that heaven will continue to contain the beauty of who we are even more abundantly than this world is able.

What made them so powerful to me, I think, is that the tales of their lives are not a product of literary device that is dreamed up and written down, nor can their human experience fit neatly within the confines of philosophical archetypes, or perfectly planned out story arcs. They are not symbols of perfection or made from magic.

My mom had no idea her small act of persistence would be so crucial to my current conviction of Catholicism. Mine is a faith that might not be as strong without the help of Catherine, Joan, Therese, and Lucy. I may not have stayed if it were not for Rita, Patrick, Nicholas, and Edith, just to name an important few.

Yet, during those days of messy mornings, short tempers, forgotten lunches, and unfinished homework, my mother’s simple act of fidelity to her own vocation opened my eyes to an unbelievable world full of real people waiting to help me. It was the added dash of heavenly perspective on which I learned to depend, all made possible by a mom willing to commit to just one more thing, in the long list of many, that needed to be done as she prepared her kids to go off to school.

1 thought on “The Saints”