The Pope Who Loved 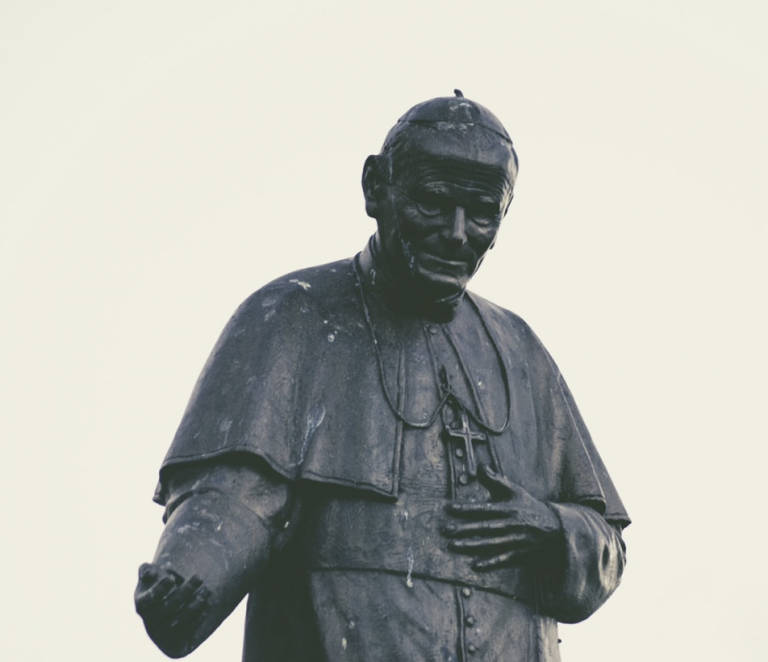 Everybody these days knows Pope St. John Paul II for Theology of the Body – at least, everyone in my circles does. Most remember him for helping to articulate and lead a response to Soviet Socialism. He was an ardent defender of the value of human life and a long-reigning Pope.

Many people saw him in person and have a favorite story about or saying from him.

Only guys who went to my alma mater High School during the time of Msgr. George Tribou know the story about Pope St. John Paul II that I want to tell here.

Fr. Tribou deserves his own set of stories in my mind. He was a strict and direct rector of an all boys Catholic High School in Little Rock Arkansas for something on the order of four decades. He made a distinction between his role and that of the parents, but still, imagine having teenage boys for 40 years! He was a tough old man.

All of us in the Tribou era of Little Rock had a healthy mix of fear and respect for him, and that’s important for catching sight of his story about John Paul II.

Fr. Tribou had an audience with Pope John Paul II while they were both living. Fr. Tribou said that when he approached the Holy Father, John Paul II looked him straight in the eyes and saw right into the center of his soul. Tribou admitted that the Holy Father seemed to see him for the sinful man he knew himself to be, and Tribou was afraid.

So, Fr. Tribou, a force for good and voice of holiness in his own right, stood before the Holy Father, defender of the beauty and goodness of sexuality and defeater of Soviet Socialism, and was pierced to the heart. One of the strongest characters in my adolescent life told us that there was no place to hide from his gaze. John Paul II saw him exactly for who he was. It was scary. And in spite of it all, Tribou said “and he loved me.”

He had clarity of vision that included the horrors of Nazi concentration camps and Soviet work camps. He recognized sin for what it is. He did not ignore the reality of human evil. But as a Catholic, his judgment on sin was not a condemnation to wallow in it, but a recognition that we are created in God’s goodness, redeemed in His love, and called always to be better than our sinful mistakes.

As a bishop, his judgment on sin was God’s forgiveness, reconciliation, and absolution. Pope St. John Paul II looked at one of my most beloved and respected teachers with the eyes of a genuine Father. He saw what was wrong and immediately turned his immense love to what needed to be healed. Fr. Tribou told us that he was somehow able to rest in that love, knowing he was convicted of sin, but loved in order to be better. Tribou, in turn, dedicated his life to loving us not because we were already worthy, but in order that we might become deserving.

In this, John Paul II teaches us how to love with God’s love.

It’s not a throw-away phrase for me when I say I was blessed to see Pope John Paul II twice in my life. Both situations genuinely were blessings. The first was at World Youth Day in Toronto. The Holy Father had been ill, and the talk around town was that he would not be well enough to say Mass with us, but he pushed on. The one thing that pierced me in his homily was

“Dear young people, God wants you to be holy!”

The ill Pope traveled across an ocean and I traveled across a continent to hear him say something I already knew, but needed to experience from the mouth of Peter. God wants you to be holy! This means we clearly recognize sin for what it is, a perversion of a far deeper good. And then, we reclaim the good which always lies further down inside the human person.

3 thoughts on “The Pope Who Loved”