The Martyrs and the Macabre 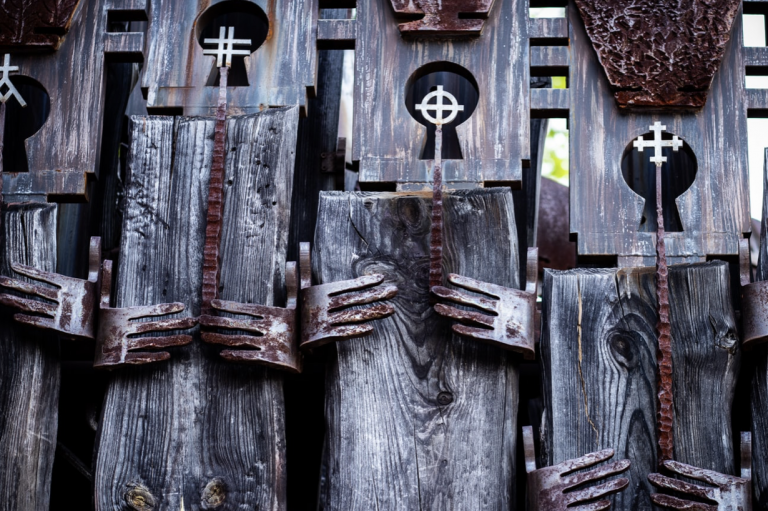 From the time of Roman persecutions until today, enemies of God have murdered the faithful in the most horrific of ways.  The details of these crimes against humanity, and (as Our Blessed Lord told Paul) against Jesus Christ himself, are things so grotesque and so disturbing that they are often not suitable for public consumption.

Unless you are Catholic, that is.

Not only do we display the broken, crucified body of our Savior on the walls of our homes, we continually tell the stories of those faithful ones who followed so closely the way of the Cross.  These are not stories for the faint of heart.

Beheadings, stake burnings, crucifixions, stonings, limb amputations, suffocations, flayings, and an unholy host of unspeakable tortures mark the Christian witness for over 2000 years and throughout our entire Earthly landscape.  Absolutely anywhere and in any era we have endeavored to present Jesus to the world, we have been killed for it.

It is the stuff of historical record and the seedbed of the Church.*

In this post-Christian world we live today, it is hard to imagine the kind of faith it would take to endure the threat of martyrdom.  Many of us are currently struggling with the threat of possible illness and death in the context of returning to Mass during a pandemic.  It is almost unfathomable to consider that there are people who accepted sure and terrible death just for professing the love of Jesus.

I am not one for morbidity.  I will not watch horror films.  But, these are the stories I tell my children—and other people’s children if they allow me.

A couple of years ago, I had the pleasure of teaching a little course called “Saints and Virtues.”  My goal for the class was very simply to define Christian virtues and to provide examples of those virtues lived out in the lives of the canonized saints.  I intended for it to be a sweet introduction to the universal call to holiness for young people.

What actually transpired was something more. . .well, interesting.

Not that the universal call to holiness isn’t interesting, mind you!  But, so often our stories of the saints are glossy, spiffed up, saccharine tales of good little girls and boys (or, women or men) who seem too perfectly put for our sensibilities.  There is certainly a place in our storytelling for holy exemplars, monastics, and the pure and pristine among the communion of saints.

But, what I found in this academic process was the very real power of presenting the stories of the martyrs to children.

My goal was never to be gratuitously gory or scandalously salacious.  I wanted to tell the truth in ways that were accessible and inspiring to the children in my class.

This group of young people were thoroughly enraptured by the stories of saints like Polycarp, who just over 100 years after Jesus walked the Earth, met his end with threats of wild animals, then a fire to consume him (which did not), and finally with the final blow of a dagger.  The story goes that the dagger opened his flesh so widely that it is reported to have gushed blood so as to extinguish the fire that failed to kill him.

They literally cheered aloud for the victory of virtue hearing the story of Lawrence, almost 100 years later. I told them how, after watching his friend Pope Sixtus II dragged away and beheaded, he endured and stayed the course of the Christian faith up to his own martyrdom on a gridiron.  This heroic deacon mocked the injustice of the oppressive Roman ruler by presenting to him the “treasures of the Church” in the form of the poor and the sick.  For this, he was sentenced to his own demise which is reported to be marked by as much good spirited humor as it was by the ugliness of death over a fire.

Our hearts broke together at the story of two African women, Perpetua and her pregnant slave Felicity, who bravely pursued the truth of Jesus Christ as newly baptized Christians only to be almost immediately martyred for their faith.  Even as a young wife and mother, Perpetua refused the enticement of escaping the death that was promised her should she maintain her Christian faith.  One small, discreet sacrifice to the pagan gods would have saved her.  She was a noblewoman, afterall, with connections and choices to make.  She endured to the end.  She and her slave Felicity, who just gave birth days before, were reported to have entered the arena in anticipation of their martyrdom with joy and radiance that were palpable.  They were beheaded.

And, I cannot describe for you the immense and transformative witness of the young martyr St. José Luis Sánchez del Rio who at 14 years old refused to deny Christ as he accepted his fate at the hands of his Mexican government assassins–the leader of whom was his own Godfather.  The boy was captured, tortured, and imprisoned for a time with many threats and temptations to abandon his Catholic faith.  He would not.  He was finally sent down the road to his own little Calvary with the soles cut off from his feet, staining the way with his blood.  Once arriving to the cemetery, the place of his martyrdom, he was stabbed multiple times. With each stabbing, he cried loudly “Viva Cristo Rey!”  His murderers struck him on the head to silence his martyr’s hymn echoing off the tombstones. They ended his life with two shots in the head.

Over many weeks, we read and discussed the stories of so many saints, many of them martyrs.  Especially when we studied the martyrs, there was a collective awe in hearing about real human beings—much like you and me–living lives and accepting deaths totally sold out for Jesus.  I do not fancy myself the best of storytellers, by any means, but as I unfolded the stories of these people, the suffering they experienced, and the faith they exhibited, I saw tears of unadulterated compassion fall from the eyes of some students.  I saw young boys, no older than 10 or 11, visibily proud and encouraged by the exercise of real virtue in the face of fear.  I shared with young girls the exhilaration of witnessing the true feminine genius at work in our sisters who died for Christ.

These macabre stories that get cleaned up or tucked away are the unexamined powerhouses of Christian fervor that we need to light up our world so very darkened by sin and evil.

* “We multiply when you reap us. The blood of Christians is seed for the Church”.  -Tertullian, Apologeticus, A.D. 197