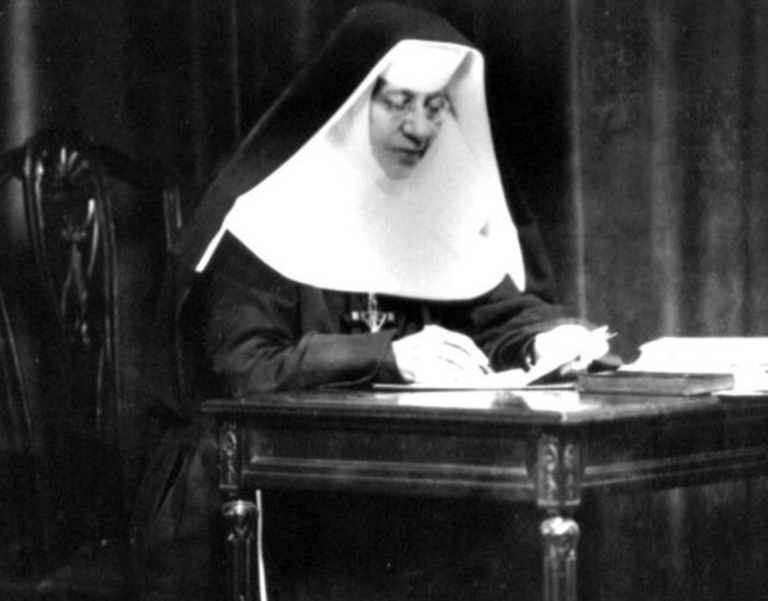 To reflect on the life of St. Katharine Drexel, will remind us of the great responsibility we have in using our gifts well and of the continued blessing God pours out when we are obedient to the mission He places in our heart.

Formed in the faith, Katharine’s childhood became a key part in her huge heart to serve.

Although her mother died soon after Katharine’s birth in 1858, her father soon remarried and his new wife, Emma, was Catholic. The Lord took this tragic happening and pulled goodness from it because, with her step mother’s example, the family all became Catholic, making it the beginning of a very prolific life lived for the good of others and the Church, which came easy as a result of their wealth and their hearts of service.

During the Civil War the needy would come to their door three days per week and Katharine would stand next to her mom, Emma, and give food, clothing, and money to anyone who showed up: the widows, the ill and those injured in the war and unable to work. She was also greatly inspired by watching her father kneel and pray for 30 minutes every day.

Her family’s wealth was a blessing to many.

As a result of their wealth, she also gained a far deeper understanding of the world as a whole. They journeyed and vacationed throughout all of the U.S. and Europe while Katharine grew up.

In 1883, when Katharine was 25 years old she lost her step mother to cancer after caring for her for 3 years at her bedside and just 2 years later she also lost her father to pleurisy. It was this experience that she says helped her realize what she wanted her life to look like. Her parents had lived a beautiful life of service.

St. Katharine started with an inspiration to help the Native and African Americans after traveling West and seeing the high demand and need for educating minorities that were very much discriminated against during this time. Determined to use the fortune her father left her after his death to help solve this dilemma, Katharine began making plans in her heart to build schools.

She felt education would be the only solution to poverty, and within schools, she could teach the faith.

In 1887 when she and her sisters traveled to Rome looking for missionaries, she had a private audience with Pope Leo XIII, who looked at her and suggested she become a missionary herself! It was not long after that with the aid of her spiritual guide Bishop O’Connor, she realized the clarity of all God was inspiring in her.

She joined the Sisters of Mercy in 1889 but soon after established her own congregation called The Sisters of the Blessed Sacrament for Indians and Colored, who were dedicated to the needs of these communities, especially in education and faith.

Mother Katharine, as she was called, traveled by train or wagon to scout out, finance, market, and build all of the missions and schools.

Presenting herself to the cities and communities she entered was no easy feat, but all soon welcomed and loved her and her vision for their good. She was met with great adversity from some though and at one point even hired bodyguards to accompany her and the sisters working to build and run these missions. The KKK was not happy with the progress she made. On one occasion where the Klan was particularly violent, Mother Katharine urged the sisters to pray, pray, pray… in this town, the Klan’s headquarters was hit by lightning and burned down. Soon their presence there was non-existent!

She built schools everywhere from New Mexico, New Orleans, Nashville, Philadelphia, Ohio, and Chicago! God blessed each and every one of them by allowing the Sisters from the Blessed Sacrament serve in them.

Mother Katharine lived until the age of 96! She was on the road and visiting each of her 34 convents until the age of 77 when she had a heart attack and felt God calling her to a quiet life of prayer. She then spent 19 years enjoying preparing herself for Heaven, as she told the sisters. At the time of her death, her order had built and ran 63 schools and 50 missions for Native or African Americans.

Her feast day is March 3 and she was canonized by St. John Paul II in the year 2000.