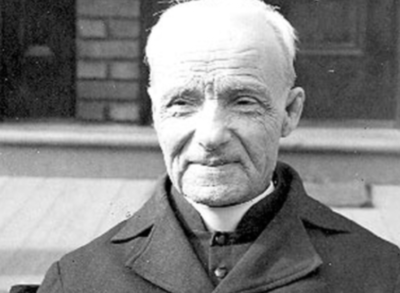 Today is the first in a month long series of Bellator Society pieces on the topic of Victory.  We believe that there is much space to fill in this world for the celebration of victories–big and small.  Join us for a month of encouragement as we use this New Year to celebrate the victories we have as followers of Christ, the Victor.

Today is the feast day of a relatively new saint in the Catholic Church.  St. Andre Bessette is still a “baby saint” with only 10 years since his canonization.  But, his story is one of inspiration and hope for anyone who feels too small for a big impact.  St. Andre often said,

“It is with the smallest brushes that the artists paint the most beautiful pictures.”

And so it is.  God so often chooses the smallest among us—the weak, the broken, the sick, the overlooked—to show forth His glory in the most amazing ways.

Andre was born nearly two centuries ago.  He was the 8th of 12 children born into a humble French Canadian family.  Andre was sickly at birth.  He remained consistently ill and physically weak throughout his entire life.  His father died when he was 9, his mother died 3 years later and his siblings were split up for their care.  Andre initially became a farmhand at age 12, but spent the rest of his life trying new jobs and failing miserably at almost all of them.

He was not quite literate and so broken in body that, by all estimations, he had very little hope of worldly success.

When he was 26 years old, formed by a lifetime nonachievement and great suffering, he presented himself as a candidate for the Congregation of Holy Cross novitiate in Quebec.  To no one’s surprise, this endeavor was unsuccessful.  He was rejected due to his many physical ailments.

It was just another nail in the cross he was carrying.

Sensing the holiness of this small, siclkly man, the Bishop interceded for him and the Holy Cross Fathers finally compromised by accepting Andre as their doorkeeper.  This was quite literally Andre’s foot in the door for the greatness God had planned for him.

He was often the first person a sick or needy supplicant encountered upon visiting the college where the Holy Cross Fathers lived and worked.  The visitors could not have asked for a more welcoming heart than the man who lived his whole life unwelcomed, rejected, and in great pain.  He knew suffering.  He understood the suffering of others.

His small encounters with others in need at the door became the thing God used as a healing balm of miraculous proportions.

People began to speak of him as the “Miracle Man of Montreal.”

During this same time, this man of humble origins and modest means, operated a small haircutting service.  Over the years, he saved his earnings of 5 cents a hair cut to accumulate a sum of $200 that he used to found a shrine in honor of St. Joseph, to whom he had a deep and abiding devotion.

When the Holy Cross Fathers realized Andre’s enormous and growing following among the faithful and those who sought his gift of healing, he was released from his positions as doorkeeper, floor sweeper, lamp cleaner, firewood carrier, and general tiny task caretaker.  Andre, then, was able to devote the rest of his life to praying with and for the sick and needy.

God allowed this small, sickly man doing small, seemingly insignificant things for most of his life to become a victorious beacon of beatitude for the Kingdom.

This is what God can do for each of us, if we are open.  If we let Him paint with the smallness of our lives, God alone can create landscapes of impact and portraits of virtue that the world needs now like never before.