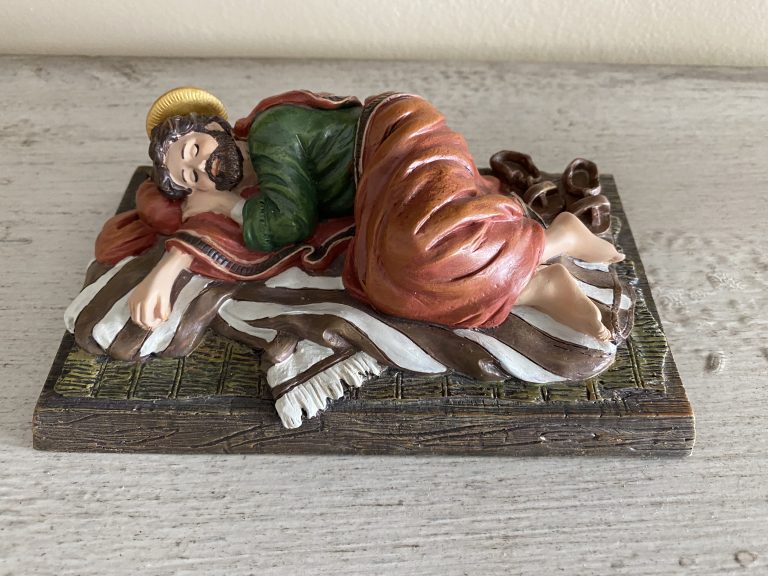 Pope Francis shared his special devotion to Sleeping Saint Joseph with the crowds gathered for the World Meeting of Families in the Philippines in 2015.

“I would also like to tell you something very personal. I have great love for Saint Joseph because he is a man of silence and strength. On my table, I have an image of Saint Joseph sleeping. Even when he is asleep, he is taking care of the Church. Yes, we know that he can do that. So when I have a problem, a difficulty, I write a little note and I put it underneath Saint Joseph so he can dream about it”

The devotion to Sleeping Saint Joseph is derived from the Holy Scriptures which recount the times the Lord revealed Himself to Saint Joseph in dreams.

“…An angel of the Lord appeared to him in a dream, saying, ‘Joseph, son of David, do not be afraid to take Mary as your wife; for that which has been conceived in her is of the Holy Spirit. ‘And she will bear a Son; and you shall call His name Jesus, for it is He who will save His people from their sins.’” (Matthew 1:20-21)

“Now when they [the wise men] had departed, behold, an angel of the Lord appeared to Joseph in a dream, saying, ‘Arise and take the Child and His mother, and flee to Egypt, and remain there until I tell you; for Herod is going to search for the Child to destroy Him.’”

After taking refuge in Egypt and when it was safe to return to Israel again,

“…behold, an angel of the Lord appeared in a dream to Joseph in Egypt, saying, ‘Arise and take the Child and His mother, and go into the land of Israel; for those who sought the Child’s life are dead.’” (Matthew 2:19-20)

In a fourth dream, God warned Joseph not to go to Judea (Matthew 2:22), but to dwell in the city of Nazareth fulfilling what had been spoken by the prophets that Jesus would “be called a Nazarene.” (Matthew 2:23)

There are many parallels between the Old Testament Joseph, the dreamer, and our beloved Saint Joseph, foster father of Jesus, who silently obeyed the Lord each time He revealed Himself while Joseph slept. I’ve thought often about Saint Joseph who, even when he was amidst great trial, was confident enough in the Lord’s providence that he could find rest. It was in that peaceful rest that the Lord worked in Saint Joseph’s life. His steadfast obedience then followed.

Saint Joseph, pray for our peaceful rest amidst trial and take our intentions to Our Lord so close to your chaste heart.

A Prayer to Sleeping Saint Joseph

O Saint Joseph, you are a man greatly favored by the Most High. The angel of the Lord appeared to you in dreams, while you slept, to warn you and guide you as you cared for the Holy Family. You were both silent and strong, a loyal and courageous protector. Dear Saint Joseph, as you rest in the Lord, confident of His absolute power and goodness, look upon me. Please take my need into your heart, dream of it, and present it to your Son (Mention your request). Help me then, good Saint Joseph, to hear the voice of God, to arise, and act with love. I praise and thank God with joy. Saint Joseph, I love you. Amen.