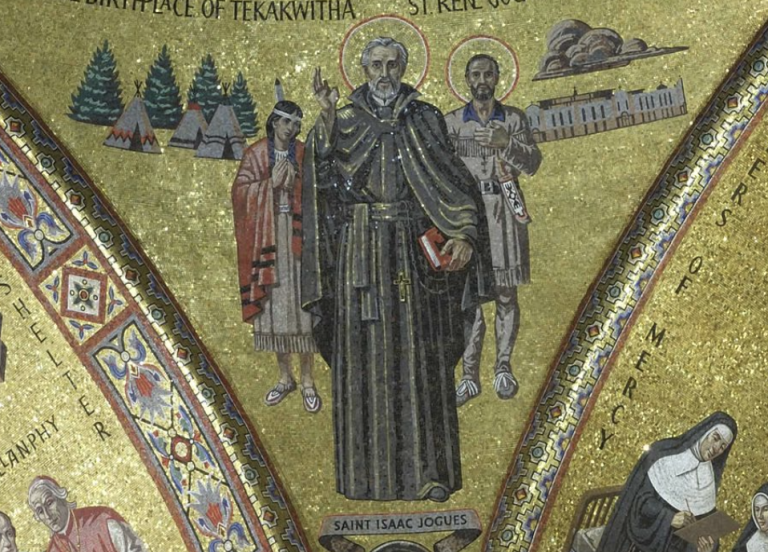 My son’s most often repeated Halloween costume is a dark robe, a bloody scar on his forehead, and about half of his fingers wrapped in bandages as if they’ve been violently mutilated. No, he was not attempting to be a villain from a horror movie. He was dressing as his namesake, Saint Isaac Jogues.

Isaac Jogues was born in Orleans, France in 1607. He became a Jesuit priest at age of twenty-nine, and, shortly after, he was on a boat heading to the “new world.” He had some initial success with the people he hoped to evangelize.

However, he was captured by another tribe who, among other tortures, chewed off the ends of several of his fingers.

Besides the immense physical pain of this, which we can hardly imagine, it brought Isaac an even greater spiritual pain. At the time, a priest could only hold the Eucharist with his thumb and forefinger. His mutilated hands meant that he could no longer say Mass. Isaac eventually escaped and returned to France. He received permission from the pope to say Mass again despite his damaged hands. Then, he lived happily ever after!

At least he might have lived happily ever after if he was what you might call a “normal” person.

Isaac could not bear that he could not teach the faith or bring the Eucharist to those he was sent to serve. He knew that he had not finished God’s work, and so he returned to New York. Shortly after this return, Isaac was killed by a tomahawk blow to the head on October 18, 1646. (Isaac’s feast day was placed on October 19, because October 18 was already the feast of St. Luke the Evangelist.)

Today, if you see an image of St. Isaac Jogues, you will likely see that he has missing fingers, a bloody scar on his head, or both. Hence, my son’s Halloween costume. Isaac is not unusual in this depiction.

Throughout the history of art, it is very common to see martyrs holding the very items by which they were killed.

St. Paul usually has a sword. St. Catherine of Alexandria holds a wheel. St. Bartholomew often holds his own skin. Why would anyone do this?

Seeing Isaac in art with his fingers missing (or Paul with his sword and so on) is a reminder for us of the love that we should have for our neighbors.

If Isaac can go back and serve the people who ate his fingers, can I love my coworker who doesn’t refill the paper in the copy machine when it’s empty? Can you love your neighbor who has a different politician’s sign in his yard?

I am glad Isaac Jogues was not a “normal” person. Saints are often not normal. However, normal people can easily become saints. If we can see others the way that Jesus sees them, the way that Isaac saw them, we can do anything.