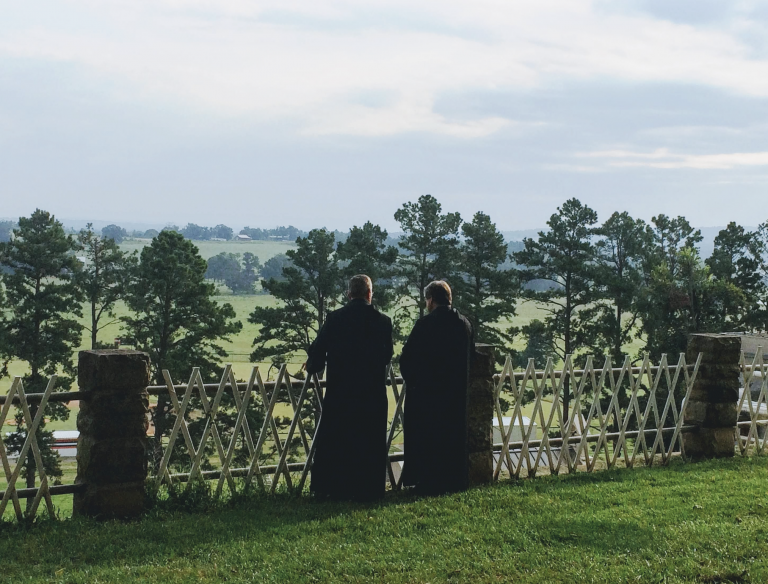 My first job out of college was teaching religion at an all-boys high school located on the campus of a Benedictine monastery.

One of my favorite places on the campus was the monks’ cemetery. Built on a hillside, the manicured green grass and the shining white, perfectly symmetrical headstones make it a lovely spot. When you take time to think about what the location actually represents, it becomes even more unique.

For over one hundred years, men have been buried in this spot.

The first monks at this monastery in Subiaco, Arkansas traveled from Einsiedeln Switzerland to minister to German-speaking railroad workers in the Arkansas River Valley. These men crossed the ocean, knowing they would likely never return home and settled in that spot where they are now buried. Benedictine monks take a vow of stability which means that once they join a monastery, they will stay at that monastery for the rest of their lives.

The black robes they wear are meant to be a reminder of this.

They are here to serve God completely until they die. When a Subiaco monk dies, his funeral ends with his brother monks carrying his coffin, which one of the monks made, down the hill to the cemetery to be placed in a hole, which one of the monks dug, and each monk and guest shovels a scoop of soil back onto the coffin. The whole row of white headstones is already in place, waiting to be engraved as needed.

For centuries, Catholics, and especially those in religious life, have uttered the phrase “frater memento mori,” which means, “Brother, remember your death.” We know that our greatest life awaits us in Heaven. All Christians are called to live in a way that is worthy of Heaven, because our death could come at any moment.

I had heard this phrase before my time at Subiaco, but I did not fully understand it until I saw it through the eyes of a monk.

During my time at the school, I taught Freshmen Religious Studies and Sophomore Scripture. In each class, I took the class to the cemetery for a lesson. I taught the Freshmen about the Universal Call to Holiness there. The Sophomores studied the Calling of the Twelve Apostles there. One day as I taught one of these lessons, Brother Louie Furhmann, O.S.B., wandered through the cemetery. I told him what we were discussing, and he took it from there.

At one point he stepped back, counted about eight or nine headstones beyond the last one that was engraved, and as he thought in his head which monks would precede him in death, he pointed at number ten and said,

“That one’s probably mine.”

I know people who claim to not be afraid of death, but I had never met anyone who actually lived it so profoundly. Brother Louie died in 2012.

The heart of both my Freshman and Sophomore lessons in the cemetery was more or less the same; when God calls, he asks us to respond with our whole life. Benedictine monks, and their cemetery, embody this perfectly. I will forever be grateful to the monks of Subiaco Abbey, both those I knew and those before me, for their witness of service to God both in life and in death.